In response to the increasing desire for urban mountain biking opportunities from a growing population of mountain bikers in the Seattle Area, Evergreen Mountain Bike Alliance, Seattle City Parks, and the Seattle Neighborhoods Matching fund (Phase 2) combined efforts with the construction of the I5 Colonnade Bike Skills Park, which was completed in 2007.

Originally consisting of several trials, including the Limestone Loop, Tqalu Trail, Fisher Line, K-Line, Nicks Kicks, Zeb’s Grtotto, Cyclone, The Octagon of Death (for derailleurs), Waterfall, Offramp, Holy Chute, and Pips Hips, the construction of the Colonnade bike provided area riders a place to skill-build close to where they lived. The community draw of the park had the effect of both displacing the previous negative uses of the area (drug use encampments) as well as paving the way for other mountain bike facilities in Washington (like Duthie Hill Bike Park). 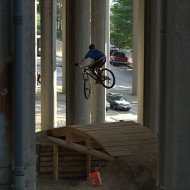 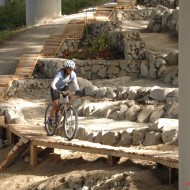