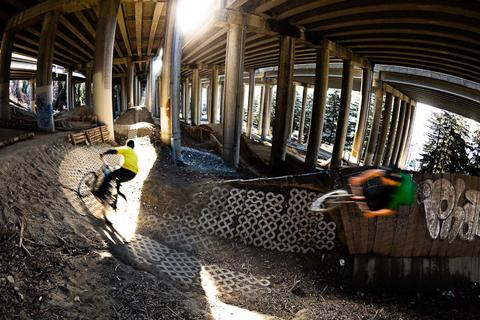 Bringing The Colonnade Back to Life

Mountain bikers are innovative thinkers, designers, and creatives. They can imagine a single-track trail in places that would be the last place any other person would think of trying. That creative vision of a few riders brought an epic place to ride to life under the I-5 Freeway. And thus, Colonnade was born.

It's time for a refresh!

The Colonnade ride park came to life long before Washington became the epic riding destination it is now. Now it sits as a historical landmark for Seattle mountain bikers. The original trails and features were created to provide local riders a place to train for technical XC rides and prepare for trips to Whistler and the North Shore of Vancouver back in the day.

Ground broke on Colonnade on October 14, 2005, and was finished in 2008, nearly 40 years after the freeway was built and divided the neighborhood. The new bike park created a connection once lost between the communities on either side of the freeway structure, and its design, collaboration, and construction were revolutionary in many ways. Collonade was the first time riders were permitted to build trails and features exclusively for them on public land in the city, perhaps even the state!

When completed, it was the first ever urban mountain bike park in Washington. The design, build, and testing process relied almost exclusively on volunteers. It was proving to stakeholders and land managers that riders in Seattle were serious about supporting new trail construction. The success of the Colonnade project was a significant milestone, though only a tiny taste of what was to come.

In December of 2007, the Backcountry Bicycle Trails Club (now Evergreen) and King County announced Duthie Hill Park, a full-fledged mountain bike ride park to be built across 120 acres of lush woods near Issaquah, a 30-minute drive east from downtown Seattle. As rider styles changed and more sought more trail variety and natural settings, more and more bikers made the journey to Duthie. They left Colonnade's old school features idle under the freeway.

Although not as popular as it was initially, Colonnade park still sees a solid number of riders. And since the mountain biking boom in 2020 and with more people seeking areas to be outside, it is time to bring the Collonade back to life.

Beginning in 2023, the Seattle Parks and Recreation Dept. will partner with Evergreen and King County to bring history back to life with a new objective, progression. The improvements for The Colonnade will update the trails and features to allow riders of all levels and ages to build skills, experience, and confidence. A paved pump track will be the park's anchor feature, open to all wheels. They are creating an accessible place for Mountain Bikers to learn and progress alongside skaters, BMX riders, and rollerbladers of all ages and abilities.

We are excited that the new and improved Colonnade will serve generations of Seattle mountain bikers and continue to spark their passion for riding trails.

This project is funded by King County grant funding and a generous grant from the IMBA. There is still some funding needed to bring this project to completion.

The Colonnade ride park is a historical landmark for Seattle mountain bikers. Built long before Washington became what it is now, its intent was to provide local riders a place to train for technical XC rides and prepare others for trips to Whistler and the North Shore of Vancouver back in the day.
7098