Login/Register
Become a member
Home > About > Our Team > Cody Olsen 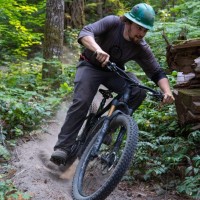 After years of riding BMX and motocross, Cody finally broke into mountain biking when he got his full suspension trail bike in 2010.  He eagerly explored his hometown of Lake Chelan, then Wenatchee, and then Leavenworth—falling in love with the quiet of trail riding and how in tune with nature he felt without a motor.

Cody joins Evergreen as a builder after spending the last 4 winters at Alta Ski area in Utah and working as a boat pilot on the Lady of the Lake on Lake Chelan during the summer months (after completing his BS in Recreation and Tourism in 2012). His 2015 winter work centers on the Olallie and Raging River projects, before moving over to Alpine Baldy in the spring of 2016.

His favorite stomping grounds are still in the Leavenworth area—like Xanadu and Rosy Boa, but when Cody travels outside of Washington the siren call of Moab usually brings him to Utah where he feels it’s “like riding on Mars.”

When he’s not hunting for the gnarliest descents, Cody hangs out with his 8-year-old chocolate lab, Fred.