Workparties in the Colonnade: Come join in!

Colonnade proved to land managers that BBTC/Evergreen members were serious about creating riding opportunities for all riders—and its completion lined up projects like Duthie, Tiger, and Raging River.

Originally consisting of several challenging trails, the completion of the Colonnade provided an urban ride center for Seattle MTBers. With a place to develop skills that didn’t require a drive to the mountains, colonnade offered a riding option for users who may not have had time or resources to ride elsewhere. 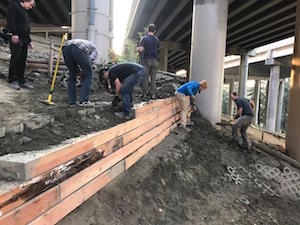 Unfortunately lacking a maintenance agreement in later years, the park fell into disrepair. However, with recent momentum from the newly-formed UW Mountain Bike Club and the local community, Evergreen has been able to go back to working in the ‘Nade!

This past two months, local community groups rallied two large work parties to restore the rider-steward atmosphere to the Colonnade. Volunteers worked on multiple sections in need of some trail love, including rebuilding retaining walls on Sidewinder, the pump track, and a now-clean limestone loop.

We couldn’t be more excited to see the Colonnade returning to the urban riding destination it was meant to be—and the one Seattle needs! But we still have a lot of work to do—and we need your help to get it done—yeah, YOU!

So, call your friends and join us for the next work party—keep an eye on the calendar and we’ll see you there!