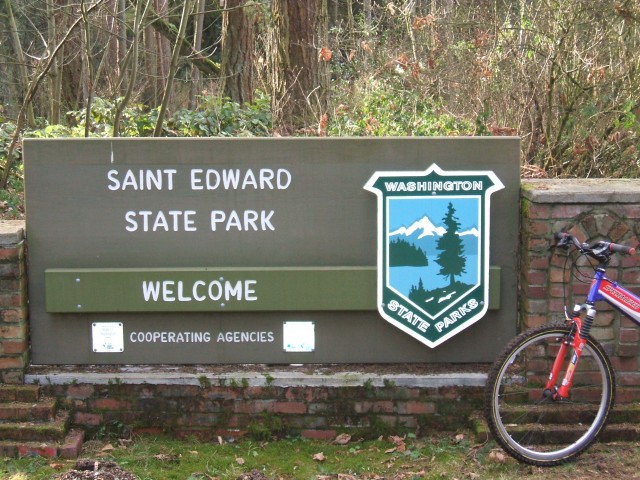 You must have a Discover Pass to park at Saint Edwards and most other State Parks and DNR properties. You can purchase an annual pass online https://fishhunt.dfw.wa.gov/wdfw/dp.html or day passes are available at the Park.

Saint Edwards State Park trails are a network of generally well maintained single track that will pose challenges for a variety of riders. You will encounter rolling singletrack, small drops and jumps, a few bermed turns, log obstacles, the occasional (low) 'skinny', a few steep climbs and descents, some root sections and even a few natural stunts. St. Edwards is a great choice for after work rides, basic XC training and riding, or even for improving skills by riding sections over and over again.

North of 141st Street / Holmes Point Drive the best trails tend to be the Volunteer trail and the main trail that runs parallel to Juanita drive. South of 141st / Holmes Point is a more complex network of trails that ultimately are all connected, so it's hard to get lost. These trails are open year round.

Evergreen has identified some specific trail repairs, improvements, and safety issues that need to be addressed. We will work with State Parks and the local community to address these issues and continue maintaining and enhancing the park's trail network in the years to come. We will also foster closer coordination between King County and Washington State Parks on maintaining the trail network shared with Big Finn Hill Park, initially including a common approach to mapping, naming and signing trails.

HOW YOU CAN HELP:

After a two-year public process State Parks adopted a CAMP (Classification and Management Plan) for St. Edward State Park that addresses land classification, future park boundaries, natural resource protection, trail use and other issues. The CAMP adopted by the State Parks and Recreation commission, which includes both management policies and a map detailing where different activities in the park should occur, protects mountain bike use on all trails where it is currently permitted, and calls for up to three new trails in the park that also would be open for mountain biking. As a result of the CAMP it is also possible that the portion of King County Big Finn Hill Park west of Juanita Drive eventually may become part of St. Edward State Park.

Evergreen was strongly represented throughout the process of drafting the plan (Tom Fitzpatrick and Preston Peterson participated in the citizen advisory committee with other interest groups and State Parks staff) as well as at the public meetings called to get community input and reaction. We also will continue to be involved with State Parks and the City of Kenmore in getting the new trails approved, and will be the main actors in siting, designing and building them.

Thought I would see how the trails do after a relentless week of rain, rain and more rain.  They were not great, lots of deep puddles and peanut butter mud.  I could never get into a groove or flow because when I started to I was forced to slow down due to a hole full of water or sticky...

First time at Edwards. It was a wet, wet, wet day but I just got a new bike and HAD to get out.  It was super fun and not to slippery. There were puddles tho, lots of them. Nothing to stop the smiles, in fact they enhanced them.  The trails south of 141st are the best. I did get a bit l...

Watch for the pedestrian only trails

A fairly fun ride though I mainly go there due to its proximity to Seattle. The section between Big Finn Hill and south of QFC has some decent mostly flat trails. A six-year-old on a BMX bike can ride most of that. North of Holmes Point, there's some decent trails and some steeper terrain that is...

For my first time doing anything of this sort saint edwards was a great start. I have found my new passion. It was nice and dry a few loose gravel spots but nothing a noob wouldnt be able to handle. Will defenately be going again for more practice.

While the trails at St. Eds usually drain fairly well, at the moment they are very water-logged, you're going to get really muddy if you decide to go for it.  The new pipeline replacement trail is the one exception, and it's almost worth it to go just for that.